Once I finished up the customized DSP my next step was to surf the net to find some good Daniel Tiger images to use. I found some nice large jpegs of each individual character, and then also some group shots. I was so glad I was able to find some quailty pictures since the show is so new :)

Then I got to work putting together the invite. I used a picture of the 'neighborhood' for the front with some of the song lyrics. Cute right? You can see the cobblestone road that I was trying to recreate in my DSP there too :) 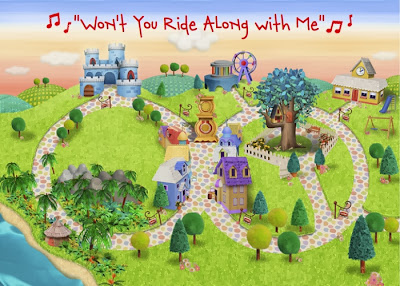 Then for the back I used the adorable image of the group peeking over a ledge. I placed them on a strip of DSP and ribbon as their 'ledge' and then placed an oval mat behind them which I could write the info on (ps- don't everyone show up at this day and time- they are just placeholders until I figure out when we are really scheduling this thing!). I used the 'nifty galifty' freeform tool to make an oval I could tac the RSVP info to also- isn't that a cool feature? Once the words are attached to the shape all I had to do was turn the opacity of the oval to zero and now all you see are the words. Awesomeness :) 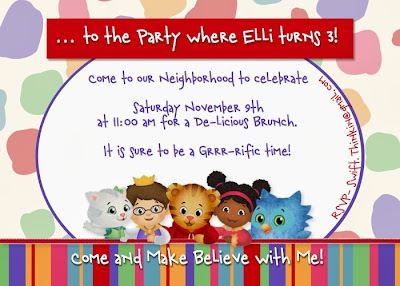 Isn't it Grrr-rific as Daniel would say? Well, I hope my daughter likes them- but let's be honest, she just wants the cake :)

Love it! I am doing a Daniel Tiger Party for my going-to-be 3 year old and love your graphics! Awesome job!

Where did you get the font you used for the invites? So cute!

I checked and the font is CK Shu Shu (CK means it is a Creating Keepsakes font). They used to have a free font friday where I'm sure I got it from- but I'm pretty sure that they are available for purchase on the website also.

Thanks so much for your kind words! I really love creating and going all out for my kids parties. It is so much fun :) I can't wait to share the My Little Pony party that is currently in the works.