So while I was away on Maturnity leave I actually managed to get TWO photobooks done in two weeks time. The first was my Christmas album that I had begun (but only had a few pages) and the second was of our summer vacation at the lake last year. Now how did I do so much in such little time you ask???

Simple. I used templates :) They are fantastic! With two little ones around now I'm going to have to start doing this more often as they are a HUGE timesaver.

For my Christmas album I was using the Keep this Memory template and changing it up to add Christmas-y paper and elements. Also I love Love LOVE the fact that you can now recolor elements in MDS, which allowed me to change the existing elements I wanted to keep into my new color scheme.

Here is one of my favorite pages from the album. Probably because the two people in it are so adorable and I'm biased :) 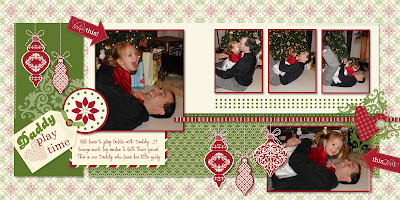 Here is the page as it is in the template. See the similarities? Now obviously I did switch it up a bit, but having that template to start with was so valuable and WAY easier than starting from scratch. 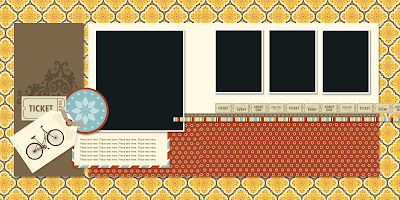 Flutterby again soon to hear about my summer vacation album!