MDS is for so much more than just digital scrapbooking. It is also great for making cards and having them printed through the professional services... or making party favors... or personalizing journals... even just designing the card before breaking out the "real" supplies... the possibilities are endless. In the next series of posts I want to show you how I used MDS to make a hybrid card!

Once my card was put together I wanted it to be a z-fold card. In case you aren't familiar with that term, that means that I cut my paper the long way, folded it in half and then folded the top portion back in half again so it forms a z shape (albeit with a very long bottom). So, in my digital version I showed this by adding cardstock as a layer to half of the top and dropping a shadow. Then I set out designing. 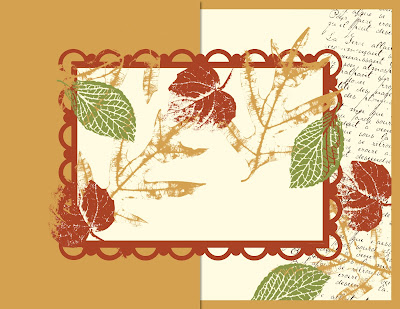 I liked the idea of having a layer ontop surrounded by the scallop trip border and edge punch, so I added that first (this would only be attached to the cardstock half on the left so the card opens nicely).  I also added a layer of vanilla under the top cardstock section to form what would be the inside of the card. Both pieces of vanilla are added as punches (you'll see why in part 2). Then I set out decorating it with the French Foliage stamp set. I didn't worry about the stamps "falling off the edge" because that will get fixed in the next step of the hybrid process. 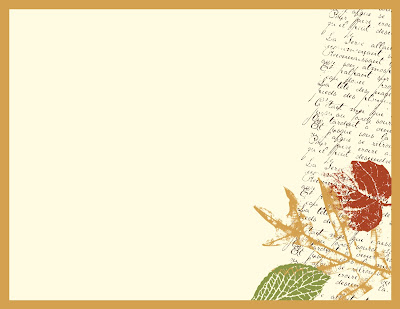 As you can see, the inside right side of the card is the same as what you can see peeking out on the front. I pretty much designed it to look nice while closed, and then moved these elements to their own page so that we could see what just the inside would look like. The pretty fall colors I have here are Cajan Craze, More Mustard, Old Olive, and Early Espresso.

Flutterby again soon to see the next steps in the process!